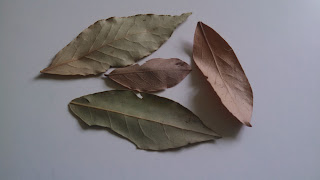 Some folks I know don’t like to use bay leaves in their cooking. I could never figure that one out. I cook with bay leaves all the time. They add an aromatic flavor to dishes that is hard to replicate. Bay leaves go back a long way. They were used by the ancient Greeks and Romans not only as a flavoring but also for medicinal  purposes. They were good for soothing an upset stomach, as a diuretic, for treating muscle pain, and even as an insect repellent (that’s right: insect repellent). Today they are used worldwide and are particularly prominent in Classical French cuisine. They are used whole and are often removed from the dish before serving (to prevent choking on the things).

Given below are five dishes using bay leaves. This may give you an idea of its true versatility. If nothing else, the next time you have indigestion, just steep some bay leaves in hot water for a great, soothing tea to quiet your tummy.

Wash 1 cup Basmati rice in cold water, drain. Add rice to 1 3/4 cups boiling water. Add two bay leaves along with a cinnamon stick and 3-4 cardamom pods. Lower heat and cook 15 minutes. Cut off heat and let it sit for 5 minutes before serving (don’t forget to remove bay leaves and cinnamon stick). Note: if desired, you can use jasmine rice as well.

Cook 8-10 bay leaves in a dry skillet until brown and toasted. Then take a whole chicken (or chicken parts) seasoned with pepper and salt, and moisten with some lager beer or white wine (for a richer flavor, you can use brandy or whisky). Wrap the chicken in aluminum foil with a carpet of toasted bay leaves on the bottom and on top. Seal and place in a preheated oven (375 F.) and cook until done (30-45 minutes depending on whether you use a whole chicken or chicken parts).

In a skillet or pan, sauté in oil: 1 medium chopped onion, 2 cloves minced garlic, 4 bay leaves, and 2 cinnamon sticks. When onion is soft and translucent, add 1 pound ground meat (beef, pork, chicken, or turkey). Cook until meat is browned. Add 1 8-ounce can tomato sauce, 1/3 cup dry red wine, and season to taste with salt and ground black pepper. Cover and cook on low heat for 1/2 hour. Remove bay leaves and cinnamon sticks and serve with favorite pasta. If desired, you may add whatever vegetables you like during cooking.

Soak as many bay leaves as needed in water. Then place them on skewers along with the chicken, lamb, beef, veggies, whatever. And grill as you normally would. When done, remove from skewers and discard bay leaves.

all, beans and legumes, rice