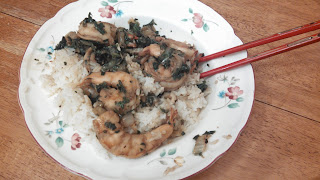 I was recently given a jar of fermented black beans as a gift. The first thing I asked is, How do I use this thing?  Then I discovered it is very common in Chinese cuisine, and it’s an item found  in Asian stores.  I also learned that, in cooking, it should be used rather sparingly. Its not like opening a can of beans and adding it to your stew. A little bit goes a long way. The recipe I tried it with is stir-fried shrimp.

The dish is easy to cook and calls for the usual ingredients found in Cantonese dishes: soy sauce, sesame oil, bok choi (or other cabbage, if desired), ginger, and scallions. I decided to give it a sweet and sour affect by adding honey to the mix. The result is given below. Served over steamed rice, or, if you like, lo mein noodles, it’s delicious.

1. Soak black beans in wine or sherry. In a large bowl, marinate shrimp in 1 tablespoon honey, 1 tablespoon soy sauce, sliced garlic, salt and 1 teaspoon sesame oil. Set aside.
2. Separate bok choi leaves from stems. Chop stems into 1-inch pieces, and chop leaves roughly.
3. Preheat a wok, large skillet or frying pan over medium-high heat. Add 1 tablespoon peanut oil. Raise heat to high, and when it begins to smoke, add minced garlic and immediately add shrimp with its marinade. Cook for about 2 minutes, stirring frequently. Spoon shrimp out of wok into a plate and set aside.
4. Add remaining tablespoon peanut oil to wok and, when it smokes, add ginger and bok choi. Cook, stirring frequently, for about 4 minutes.
5. Add shrimp to wok. Stir in black beans and their liquid, scallions, and remaining honey and soy sauce. Cook for 1 minutes. Turn off heat, drizzle remaining sesame oil on top, and serve.
Yield: 4 servings.

all, beans and legumes, shellfish