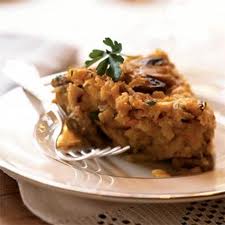 One of the most festive of Jewish holidays is upon us, Passover. This is the ritual retelling of the liberation of the ancient Hebrews from bondage  in Egypt. This is all immortalized in the Passover Seder, that gathering of family and friends to commemorate the occasion. At the Seder table the retelling is done from reading the Haggadah, an ancient work derived from the Mishnah, which is a compendium of Jewish oral tradition.

The Seder table highlights certain foods which are a must for this traditional holiday. Among these is Charoset (my favorite), a mixture of chopped fruits and nuts. It’s a brown, lumpy concoction which recalls the mortar used by the Hebrews to build the storehouses of Egypt. Whatever its appearance, it’s truly delicious and flavorful. Charoset serves to soften the taste of the bitter herbs (another traditional item) featuring grated horseradish and romaine lettuce. Other dishes served may include matzo ball soup, gefilte fish, roast chicken  (another holiday standby), brisket, turkey, and lamb. The latter is popular among Sephardic Jews, that is, those Jews whose descendants hail from the Mediterranean and the Middle East.

The one dish that I enjoy most is kugel, typically considered a side dish. Kugel is a  sweet pudding or casserole made from noodles or potatoes. The word itself is Yiddish for “ball.” It is Ashkenazi in origin. Ashkenazi Jews are those descended from medieval Jewish communities in Eastern Europe.

The kugel recipe given below is courtesy of my dear friend, Paul Goldstein. Me and Pablo go back a long ways. We first met in the 60s, and both of use are still alive and kicking. Pablo’s kugel is so good it can be served on its own. And even if you aren’t Jewish, you can still enjoy this savory creation on any occasion—even for Easter.

1.  Preheat oven to 350 degrees.
2. In a pot or pan, cook noodles according to package directions. Drain and rinse under cold running water, and put back in the pot.
3. Add apples, pear, raisins, eggs and cinnamon. Mix well.
4. Grease a skillet (preferably cast-iron) with butter or margarine. Pour mixture into the skillet, and bake for 1 hour or until top is brown.
Yield: 4 servings

Note: Kugel can be eaten either hot or cold. You can also serve it with apple sauce or sour cream. If you really want to be decadent, try with vanilla ice cream.