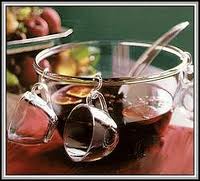 Prior to the American revolution, the drink of choice in the colonies was rum. It fueled the American heart. It’s estimated that the colonists downed 3 3/4 gallons per head per year, and this includes women and children. At his inaugural in 1789, George Washington, the first President of the United States, had a barrel of Barbados rum served at the function. In colonial homes, no social gathering would be complete without a bowl of rum punch.

Today we think of rum mainly as a mixed drink such as in mojitos, daiquiris, or that rite of passage for almost every young person in America, rum and coca-cola. But rum punch at your next party or get-together is not such a bad idea. You can make it as powerful or as weak as desired, and, believe me, it livens up any gathering. Below is given a rum punch recipe from the 18th century. And, yes, it’s as delicious now as it was then. If you want to imitate those crazy Republican tea party folks, put on a tri-corner colonial hat, ruffled shirt and knee britches, and your set to party the old-fashioned way. Oh,yes, the recipe is from my second cookbook, The Pharaoh’s Feast, also published in the United Kingdom under the title, Feasting with the Ancestors.

1 cup pure maple syrup
2 cups lemon or lime juice
1 quart water (you can use sparkling water to give it fizz)
1 bottle (750 ml.) dark rum (I prefer Anejo which is aged over 8 years, but any good dark rum will do)
Ground nutmeg

1.In a punch bowl, mix the maple syrup with the lemon or lime juice. Add water and stir.
2. Add the rum and serve over ice in the punch bowl, with nutmeg sprinkled on top.
Yield: about 20 servings.

all, cocktails and rum drinks