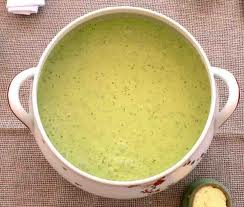 Now that summer is here, cold soups are in order. That’s right, cold soups. Back in my youth, in Spanish Harlem, we never heard of cold soups, not even in summer. It was an alien concept to us. Soups were always hot and hardy, even on the warmest of days. Then in my early manhood I discovered Vichyssoise (pronounced “vish-ee-SWAHZ” or “vee-she-swahz), a rich and creamy potato-leak soup that’s served cold. Not being too well versed at the time, I assume that it was a French dish. Then I discovered that it was, in fact, American. It was conjured up by chef Louis Diat of the Ritz-Carlton in New York City in 1917. Still, we must give the French credit since the soup most likely evolved from the leek and potato soup very popular in France, potage bonne temme. In his book, Cooking a la Ritz, Mr. Diat himself sates that the name comes from Vichy, the French town near his childhood home. He called it Cream Vichyssoise Glacee.

Since discovering this gem I’ve become a fan of cold soups in general, especially when the humid, hot weather is upon us. Vichyssoise may incorporate its own ingredients but cold soups can be made with almost any vegetable. Or fruit, for that fact. Cold soups with vegetables just need cream and whatever herbs you prefer.  And all you need is a blender or food processor. Remember that you have to blend to a  nice smoothness. Now,  I like soups, hot or cold, on the thick side. Some prefer them a tad thinner. Just blend to the consistency you like. The important thing is the chilling—at least three hours in the fridge is essential. You can serve cold soups indoors or outdoors, even as a first course before grilling. If you want to be fancy about it, you can serve the soup in an iced tureen or chilled bowls. Or keep it cold in your thermos and chug it at work.

As for ingredients, the possibilities are endless: such greens as broccoli, spinach, zucchini, asparagus, etc.; or a white veggie such as cauliflower. Experiment—you won’t be disappointed. It’s the easiest thing to prepare.

1 bunch of greens, such as asparagus, spinach, broccoli, leeks, etc. Or other vegetable such as a head of
cauliflower. The vegetables should be rinsed, drained, and cut into bite-sized pieces.
2 cups chicken broth (if you want a thinner soup, make it 3 cups)
1 clove garlic, crushed
1/8 teaspoon dried oregano or 1/4 teaspoon fresh
1/4 cup heavy cream
Salt and black ground pepper to taste.
1. Heat chicken broth in a pan, and bring to a boil. Add the vegetable, reduce heat, cover and cook 3 to 5 minutes depending upon thickness of veggie. They should be just tender.
2. Transfer to a blender or food processor. Add the garlic and oregano, and puree until just smooth.
3. Stir in the heavy cream and season to taste with salt and pepper.
4. Chill in the fridge for at least 3 hours before serving.
Yield: 4 servings.

Gregorio Uribe, and the Real Heroes