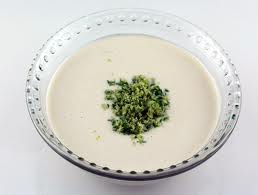 Gazpacho is the perfect summer dish, especially when it’s just too hot to cook. This famed Spanish soup is of Moorish origins. Remember that the Moors (Muslims of Northern Africa ) occupied Spain for over seven centuries. Some etymologists suggest that the word, gazpacho, derives from the Arabic word for soaked bread. Others say that it may have come from the word caspa, which means residue or fragment—as in the residue or fragments of bread used in the original recipe.

Andalusia is renowned as the home of gazpacho, especially in the province of Malaga. It probably originated as a soup of soaked bread, olive oil, and garlic. Today the Spaniards would call this an ajo blanco, or garlic soup. And this was the most common gazpacho until the introduction of the tomato to the European continent, which resulted in the chilled tomato concoction of today.

Today, Andalusian gazpacho is made with ripe tomatoes, bell peppers, cucumbers, garlic, moistened bread, and ice water. But I’ve gone back to the original gazpacho as derived from its Moorish influence.

1. Soak the bread in water. Drain and squeeze to extract excess moisture.
2. In a mortar (preferably earthenware), pound the garlic until crushed.
3. In a wooden bowl, mix the garlic, bread, and salt, and stir in the olive oil.
4. Add cold water as desired, to get the smoothness of a soup. Recall this the original gazpacho, which is served at room temperature, garnished with chopped scallions. But, if you want, you can serve it chill after an hour or so in the fridge.
Yield: 4 servings.

Note: You can modify this recipe for Malaga-Style Gazpacho by adding 2/3 cup crushed peeled almonds and 1/2 teaspoonr red wine vinegar before adding the cold water.