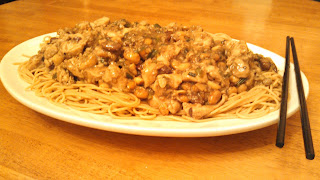 Kung Pao chicken is one of those dishes that has filtered into western cuisine during the last generation or so. When I was a kid and the family would trudge down to the Old Wah Kee restaurant in Chinatown, we would have all the traditional Chinese-American dishes (fried rice, chow mein, egg-drop soup, etc.) We never had Kung Pao chicken. That started popping up in later years, and it caught on because it was spicier that traditional Chinese fare. Kung Pao chicken (or Gong Bao, Kung Po) comes from Sichuan cooking that originated in Sichuan Province in southwest China. Sichuan cooking is noted for its use of Sichuan peppercorns, also known as Chinese coriander and used in Tibetan, Nepelese and Indian cuisine as well. The westernize version of the dish (which includes the recipe given) does not use Sichuan peppercorn since it was illegal to import then into the U.S. from 1968 to 2005. The ban solidified the western version and chili peppers are used instead. Also, in my recipe, I have substituted the sugar used in most versions with honey. My contribution to this venerable dish.

During the infamous Cultural Revolution in China (1966-1976), the dish was renamed “Fast-fried chicken cubes” or “Chicken cubes with seared chilies.” Why? The dish was supposedly named after a Quin Dynasty official, Ding Baozhen, and association with the Quin (1644-1912) was considered subversive or politically incorrect. Again, why? Well, psychotic mass murderer Mao Zedong decided to preserve “true Communist ideology” by purging all “bourgeois” elements and traditional “counter-revolutionary” thought from Chinese society. It set back China socially and economically for decades.

Ding Baozhen is an interesting character. Not only was he an official of the Quin government; but he had very bad teeth and he couldn’t chew meat that was tough or thick. So his personal chef prepared for him a meal consisting of finely chopped stir-fried chicken with lost of peppercorn in it. And the dish was born.  Let me add that in my version, I serve it over whole wheat pasta rather than the traditional Chinese noodles. It doesn’t hurt to innovate.