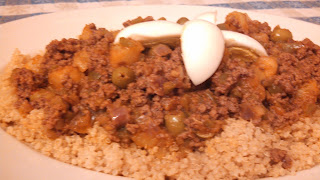 One of the most popular dish is our repertoire is picadillo (pee-kah-dee-yoh). It’s also common in Cuban cuisine. And it’s one of the easiest entreés to prepare. It’s basically a ground meat stew. But you can use ground chicken, turkey or lamb in lieu of beef, if desired. The Puerto Rican version differs from other types in that we add sofrito to the dish.

Sofrito is a base flavoring that is prevalent in our cooking. At it’s basic, it’s an aromatic mix of herbs and spices that is used in countless criollo dishes. This concept can be found in other cultures as well. One example is the India mix garam masala. Sofrito can be quickly whipped up in a blender or food processor. You can find processed sofrito by the jar in almost any supermarket or Caribbean store. Let me add this proviso: most suck. The home product is best. That being said, the only marketed one I can recommend is the sofrito made by Ricomida (myricomida.tumblr.com). It’s the only one that’s as good as the home made stuff. I’ve tried it and it’s the genuine article. If, for some reason, you don’t have the inclination to make your own, or can’t find the Ricomida brand, then mix a teaspoon of turmeric and one minced clove garlic in 3 tablespoons of olive oil and use that as a substitute. It won’t be kosher, but it’ll come close.

Traditionally, sofrito is served over steamed white rice. This time around, I experimented and served it with quinoa, a grain from Peru (it was a staple of Inca cuisine) that has gained popularity in the last few years. Hell, want to be even more adventurous, you can serve the sofrito over pasta.

In my cookbook, Puerto Rican Cuisine in America, the wine I recommend with the dish is Demestica, a lively red wine from Greece. But, since this is a Spanish dish, you can also serve it with a good Rioja. My favorite Rioja is Marquez de Riscal. If you can’t find it, then go for Marquez de Iberica. Both are good accompaniments to the picadillo.

1. Heat 2 tablespoons of the olive oil in a large skillet or kettle. Add beef and cook on high heat until meat loses its red color. Drain excess pan drippings.
2. Reduce heat to medium, add onion and bell pepper and sauté until onion is transparent and meat is browned (about 3 minutes). Remove from heat and set aside.
3. In a separate skillet or frying pan, heat remaining olive oil and stir-fry potato cubes until golden (about 5-7 minutes). Remove potatoes and drain on paper towels.
4. Return beef to stove and, over low heat, add tomato sauce, salt, pepper, sofrito, potatoes and olives. Stir to combine. Cover, and simmer 10 minutes.
Yield: 4 servings