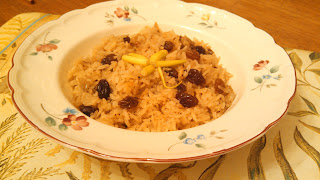 We Nuyoricans can’t do without rice. It goes back to our island culture where rice was the main side dish (along with beans) to almost any entrée. And it wasn’t just plain white rice. It was yellow rice; rice with squid (arroz con calamares—or what in my family we call black rice since the ink from the squid gives the rice a dark hue); rice with pigeon peas (arroz con gandules); the famed arroz con pollo (rice with chicken); a sumptuous paella; or even rice pudding (arroz con dulce).

Once I left the block and discovered other rice dishes out there from various cultures, I started experimenting. I discovered Indian rice, and Syrian rice (made with Syrian noodles), Italian rissoto, and Persian rice (Chilau or steamed). But my vantage point has always been pilaf rice, which is also popular in our cuisine. One can do wonders with pilaf rice, mixing it with almost any ingredient (except for Jello). I’ve done pilaf with peas, turmeric, cumin, you name it. Yet, among my favorites has always been pilaf rice with raisins; and this can be black raisin or golden raisins. The raisins give it that sweet tang that makes it adorable.

The recipe that follows shows what I mean. It can serve as an accompaniment to any vegetable, meat, fish, or fowl dish. Or even on its own, it’s a marvel. Go at it.

1. Wash rice at least three times in cold water and drain to rid it of starch. What in Pennsylvania Dutch country is known as “washing in several waters.”
2. Melt one tablespoon butter in a medium heavy saucepan (I prefer cast iron). Add onion and cook, stirring until wilted and translucent.
3. Add rice, raisins, cumin, water, bay leaf, salt and pepper. Bring to a boil. Stir, cover pan and simmer until water is absorbed (about 20 minutes). Let sit, covered, for another 10 minutes.
4. Discard bay leaf. Add coriander and remaining 1 tablespoon butter. Stir with a fork, to distribute butter in rice. Serve, or keep covered in a warm place until ready to eat.
Yield: 4 servings.