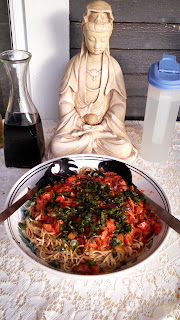 Pancetta is a pork product very popular in Italy. In some circles it’s called Italian bacon. Along with prosciutto, it’s very common in the Italian kitchen. It is made from pork meat that is salt cured and spiced with lots of black pepper. In a the supermarket or deli it comes in a tight roll  (arrotolata), or already cubed. It can even be found sliced paper thin.

If you can’t find pancetta, bacon can be substituted—but it won’t taste the same. Also, with bacon, it’s best to blanch it first in boiling water since it reduces its smoky flavor (pancetta is not a smoked product). That being said, the recipe given below can be done with almost any pasta but it’s usually served with spaghetti or linguini. Once in a while, if I’m feeling adventurous, I’ll use perciatelli, my favorite string pasta. Why? It’s thick, like a phone cable—and I love what my Uncle Phillip in pre-PC days would call a “manly pasta.”

One additional thing I must say, since we’re talking about pasta: remember in the old days when it came in one pound boxes? More and more it’s now 12 ounces. When did this crap start?  Ronzoni, bless their heart, still comes in one pound boxes. Barilla does not (it’s 13.25 ounces). Everyone else, these days, is 12 ounces. Pretty soon it’ll be 9 ounces, then 8 . . . you get the idea. Someday a family of four will have to buy two boxes of spaghetti or whatever to get fed. If you’re lucky enough to find a place that sells fresh pasta, you can still get it by the pound—and even if it’s more expensive, it’s a better deal. The corporate structure (no surprise!) is out to gyp us.

1. Wash tomatoes under cold running water and pat dry with paper towels. Chop coarsely.
2. Heat olive oil in a medium saucepan. Add pancetta and stir-fry over low heat until fat is rendered.
3. Stir in onion and cook gently for 8  minutes. Add garlic and cook 2-3 minutes more.
4. Add tomatoes. Season with salt and pepper. Cook, uncovered for about 10 minutes, stirring well. Meanwhile, cook pasta according to package instructions.
5. Stir the marjoram into the sauce. Remove from heat. Drain the pasta into a serving bowl. Pour the sauce over the pasta and toss well. Sprinkle with shredded basil, and serve, passing around the Pecorino or Romano cheese.
Yield: 4 servings.