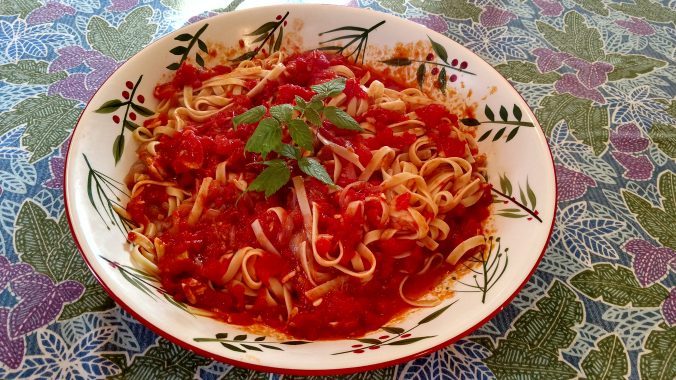 The waning days of summer, but good ripe tomatoes are still in season, and I indulged every chance to enjoy them. I won’t have such a treat during the cold winter months (it’ll be Italian canned tomatoes). Thus I posit another recipe featuring tomatoes. This time it’s fettuccine with tomatoes loaded with garlic and something unique: caramelized onions. The fettuccine, or any pasta with tomato sauce is a well-known favorite. The caramelized onions are something else.  For the record, the onion recipe comes from the monthly magazine, Cook’s Illustrated (September & October 2017, Number 148). The recipe intrigued me. I have my own method of making caramelized onions. But this one was different that a baking soda solution is added to the dish. It rendered a novel tangy taste.

Again, let me state that any pasta, tubular or string can be used in this recipe. We happen to have fettuccine on hand, and that was it.

Sliced Turkey with Lemon and Capers