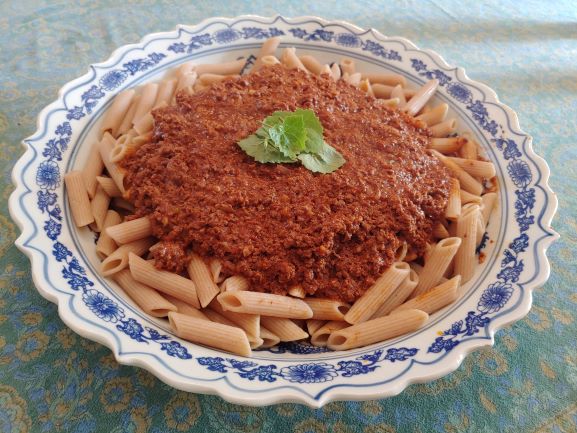 One of the most popular dishes in the Nuyorican repertoire is Picadillo (pee-kah-dee-yoh), a ground meat stew that we serve over rice. Lately I’ve discovered a recipe that is very similar to picadillo, but is of Greek origin. It’s a tomato-meat sauce called makaronada. It’s fascinating that, on two different parts of the world, you could find such similar recipes. The difference with the Greek version is in its ingredients. It includes such things as cinnamon, allspice and cloves, things we would never put in our picadillo. Also, instead of tomato sauce, as we do it, this dish has tomato paste.

We tried out the recipe and found it marvelous. The mix of ingredients with the ground beef makes for a marvelous meal. This dish, I’m told, is normally served over macaroni with grated cheese.  This time around we used whole-heat penne, and it came out great! 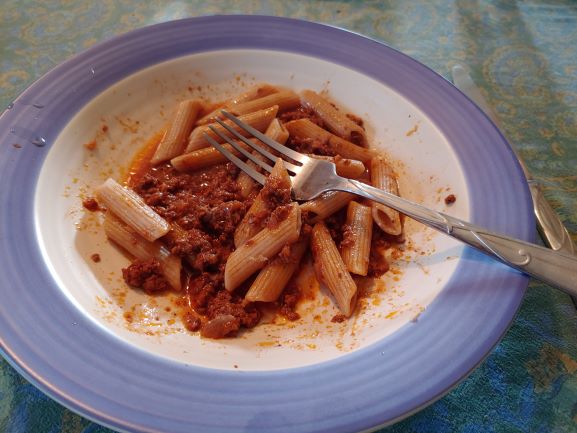 1. Melt the butter in a large skillet. Add the onion, garlic, and beef. Cook over medium heat, stirring occasionally, until the meat loses its pink color.
2. Combine the tomato paste and water and add to the meat mixture. Add wine, salt, pepper, cinnamon stick, allspice and cloves. Bring to a boil, reduce heat to simmer and cook, partially covered, for 1 hour
3. Remove the cinnamon stick and serve.
Yield: 4-6 servings.