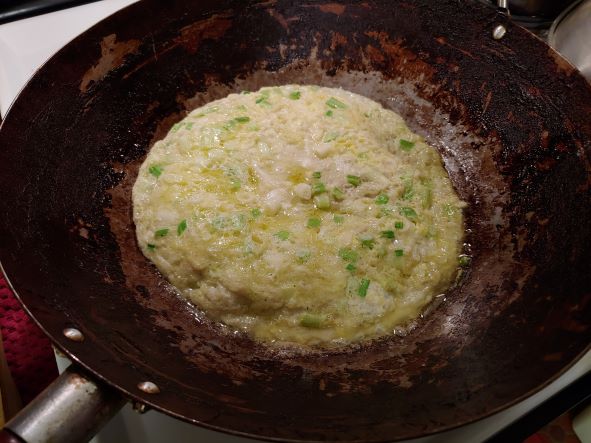 This is a recipe I acquired from an old cookbook, The Wok, A Chinese Cookbook by Gary Lee and published in 1970 (Pacific Productions). Yeah, 1970, when I was a young whippersnapper and on the prowl (I had just returned from Vietnam). Over the years I’ve come back to this tome. As far as I know, it was one of the “modern” Chinese cookbooks published in that era. It’s got great recipes that can no longer be found in more contemporary Asian cookbooks. And this is one of them: Egg-Cake Baked in a Wok.

Until that time I did not know that one could bake anything in a wok, let alone eggs. But it’s an easy recipe and delicious. If you don’ have a wok, a fry pan or skillet will do. Note that the recipe calls for ‘oil’ in the preparation. By that is meant peanut oil. Yet I’m sure you can use olive oil or vegetable oil. In my rendition I used olive oil included in the egg mix, but peanut oil for the frying. I also tweaked the recipe by adding mince garlic. It came out marvelous. My wife, who is a stone critic and judge of food, declared it’s the best egg cake she’s ever had. And that, from her, is resounding approval.

I imagine this dish would be served with steamed white rice. We had it with homemade baked rolls, and it was just as good. So this dish could be for breakfast, lunch or dinner. Your choice. You won’t be disappointed. The recipe makes 4 servings. Yes, you can add more eggs if you have more people coming over. By the way, the recipe calls for “green onion.” By that, it means scallions 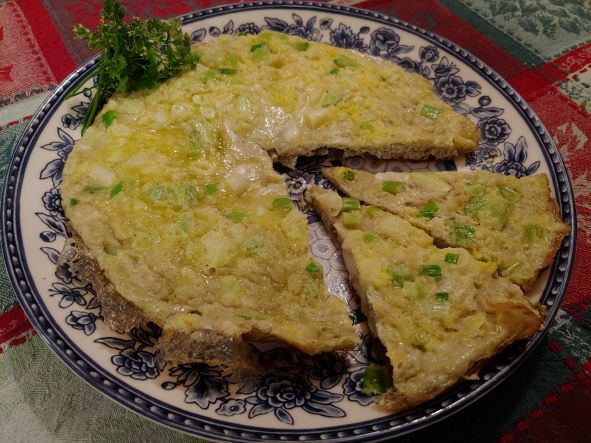 This is a practical dish for a variety in egg dishes.
Beat eggs with salt, onion., garlic and oil (olive oil). Heat the wok, but not too hot and add 1 teaspoon oil (peanut oil). Tilt the wok around and around until the oil coats the entire cooking area of the wok. Pour in the beaten eggs. Lower the heat to medium-low and cover the batch with a small lid – just big enough to cover the eggs. Wait for several minutes then add in a few drops of oil (peanut oil) around the edge of the lid. Repeat after a few minutes. The eggs should be firm after about 6 to 10 minutes. Take the eggs out and serve upside down on a plate, cut diagonally into strips ¾” to 1 ½” in size.