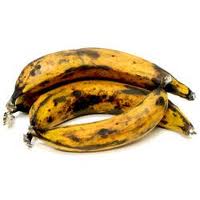 Another of our favorite uses of ripe plantains is cheese-stuffed plantain balls. Think of it as fallafel balls but with cheese inside and a luscious, sweet exterior. Believe me, once you’ve had these plantain balls, you’ll be hooked. They can be served as an appetizer or as a main entree accompanied by rice—a perfect vegan dish.

1. Drop the plantain halves into boiling salted water and cover. Cook rapidly for 20 minutes. Drain. Peel the plantains and mush the pulp. Add the butter and 2 tablespoons cornstarch and mix well. Let cool enough to handle.
2. To shape the balls, coat the palms of the hands with cornstarch. Pick up about 1 tablespoon of the pulp (or 1 teaspoon, depending on the size desired) and flatten slightly between the palms. Add a portion of the cheese and mold the plantain around it, shaping the whole into a ball. Repeat until all the balls are formed. Be aware that you can make the balls as large or as small as you desire. In the Rivera family we like big plantain balls. Other folk may prefer smaller variations similar to Swedish-type meatballs.
3. Heat the oil for deep frying. Drop the balls into the oil and cook until golden. Remove and drain on paper towels.
Yield: 8 to 12 balls, depending on size.

This is frustrating! I was just stating facts about my latest books, then I must have pressed a wrong button or something, and the freakin’ thing is posted without me having finished my spiel or even spell checking the damn thing.

So I’m just going to continue as if nothing had occurred (I hate these fandangled machines!) Let me elaborate: I still do most of my writing on a 1942 Royal portable typewriter. Thank the gods for things that last.

As noted before, my last cookbook, The Pharaoh’s Feast, has also been published in the United Kingdom under the title, Feasting with the Ancestors. The publisher is Sutton Publishing.

The novel I’ve just completed, The Centurion, is something else entirely. It’s a historical novel about ancient Rome and Christianity. Two tumultuous topics. Where Christianity is concerned, the Romans were the bad guys. This story is told from the Roman—the bad guy’s point of view—as a perceived alien religion threatens the current social and political order. Look at it this way, a true pagan society would have been shocked and mortified when something like the Gospels made its way into their lives. They would have considered it exotic, foreign, even atheistic since these newcomers did not believe in the pantheon of the gods. This is not a religious work, far from it. It’s a rousing tale of wars, assassinations, upheavals and family rivalries. So, any publisher out there interested in something like this, just let me know.

In terms of my two novels, the first one, titled: Fire and Rain, is an account of a prison camp, a brig, during the Vietnam War, where American soldiers accused of various crimes were interned. My second novel, The Proud and the Immortal, is a tale of a homeless community that lived under the old abandoned Amtrak tunnels in New York City. It is a study of a society in microcosm. I make no judgments as to the people living there. I just tell their tale.

Finally, below is a recipe from my first cookbook: Puerto Rican Cuisine in America. I am of Puerto Rican descent. And true to my forebears, I love to eat, drink and socialize. I am a fairly good cook who, as a lad, learned to cook while watching my mother prepared great home meals. Oh, by the way, in terms of full disclosure, I’ve also dabbled in the martial arts for over 30 years.

The dish is Tostones—fried green plantains. Plantains are a staple in the Caribbean and Latin America. You can find them in almost any greengrocer or super market these days. Some gourmands prefer them with Russian or blue cheese dressing. That’s a new innovation. When I was coming up in the world, we just ate them with a little salt sprinkled over.

1. To remove skins from plantains, cut tips at both ends, cut a slit along the length of the plantain and peel off. To facilitate easier handling, some cooks dip plantains in hot water for 5 minutes and then remove the skin. Once plantains are peeled, cut into diagonal slices about 1-inch thick. reserve peels: typically the unbroken skin of the plantain is used for flattening the tostones.

2. Combine water and salt in a bowl and soak plantain slices for 30 minutes. Drain well.

3. Fill a cast iron or heavy bottomed skillet halfway with vegetable oil. Heat oil until over moderate heat until very hot. Deep fry for 5 to 7 minutes.

4. remove with slotted spoon and drain on paper towels.

5. Place a plantain slice between two plantain peels, envelope fashion, and pound flat with the palm of the hand. repeat until all slices are pressed. return plantain slices to skillet and cook until golden brown (about 5 minutes longer). Drain on absorbent paper towels and sprinkle lightly with salt.

If you’re interested in seeing more recipes (or getting information on any of my other books) you are free to peruse my website at http//www.oswaldrivera.com

My webguy says you can also hook in directly into my website from the blog page.

Either way, hope to hear from you soon.

As they use to say in the old Bob and Ray show (old timers will remember this): Until next time, hang by your thumbs, and write if you get work.