A wok is a perfect tool for steaming foods. The whole idea is to cook food rapidly using hot most air. This cloud of steam evenly cooks the food without need to boil it in water or broth. It’s perfect for cooking seafood since it preserves the delicacy of the fish. In the process one uses as much water as in necessary to steam the dish and, if the water boils away during the steaming, more water can be added to the wok.

Any food can be cooked by steaming, be it meat, sliced or in big chunks, or vegetables, either frozen or fresh. If the food is frozen, it should be brought to room temperature otherwise condensation will result and the food will become too moist and watery. Slow steaming takes about 40 minutes to an hour. Quick steaming of cut or sliced food can take 5 to 15 minutes.

Most woks come with a steamer attachment: a small round, serrated metal stand on which you can place the food. If you don’t have one, then you can make a homemade version by piercing holes in a metal pie plate. The wok is filled with 2-3 cups of water. A small can is placed into the water and the pierced pie plate rests on the can. The food is laid on the pie plate and the wok is covered with the lid after the steam starts rising. You start steaming the food when the water reaches a fast boil. When steaming delicate foods such as fish, timing is very important. Too long a time steaming will toughen the food. It’s best to remove steamed foods a minute before they are completely cooked. That way the heat of the steamer will complete the cooking process and the food will come to table hot and perfect.

The recipe given is for steamed chicken. The chicken can be steamed as is, in water, and a sauce poured over it before serving. My recipe calls for the chicken in a marinade (makes it more flavorful that way).

1. Rinse chicken pieces under cold running water and pat dry with paper towels.
2. In a bowl, mix marinade ingredients. Add chicken pieces and let marinate for 15 minutes at room temperature.
3. Arrange the pieces on a plate in a single layer and steam at medium-high for 10 minutes. Serve with boiled rice.
Yield: 4 servings.

Note: A bigger (2 1/2 to 3 pound) chicken can be use. In this case, increase soy sauce to 3/4 cup, and marinate with other ingredients as given. Place chicken pieces on a plate and arrange in a heaping shape with skin side on top. Steam for 10 minutes, remove lid from wok and, using tongs or a fork, rearrange chicken pieces so that skin pieces are on bottom and other pieces on top, and steam for another 10 minutes.

“MON-DON-GO.” If rolls off the tongue. It sounds African, just like its origin. Some claim the term may have been coined by the Carib Indians of the Antilles. But most likely it was labeled by the black slaves imported to Puerto Rico during the Spanish colonization. It is a unique dish in our culture since it incorporates tripe in the recipe. And what you get is a deliciously thick stew that invigorates body and soul. Now, tripe is in the category of such unconventional foods (to some) as sweetbreads, calf’s brains and octopus. Not only that, in Mondongo, the tripe is teamed up with another not so sophisticated comestible: calf’s feet. The first response is “Yuck!” But, given a chance, you’ll come back for more, believe me.

To Puerto Ricans, Mondongo, is ubiquitous. Especially on Sundays mornings when all those wasted partygoers line up for orders of Modongo in San Juan and Spanish Harlem. My relatives claim it’s the best thing for a hangover the day after. I recall that on the island, in the city of Ponce, there are two or three hole-in-the-wall joints whose claim to fame comes from the fact they make Mondongo not with calf’s feet but with pig’s feet. Legions of aficionados seek out this special platter—and at a buck-fifty the price is just right.

If you’re not familiar with tripe, today it can be found in most supermarkets. It looks like a white sheet patterned with honeycombs. First you trim the excess cartilage, and follow the recipe below as given. As to calf’s feet, it normally comes packaged in pieces so you don’t have to bother cutting it up. The dish also includes yautia (tanier or dasheen) and name (pronounced nyah-meh). Both are roots plants (collective called bianda) and found in Caribbean stores or markets.

The recipe comes from my first cookbooks, Puerto Rican Cuisine in America (Thunder’s Mouth Press). An added note: some cooks add macaroni to the dish. In my family we do not, we keep it traditional. Still, if the yen is there, a half pound of macaroni can be added to the stew during the last 15 minutes of cooking.

1. Rinse tripe and calf’s feet under cold running water. Pat dry with paper towels and set aside calf’s feet.
2. Rub tripe with lemons and place in a large kettle or pot. Squeeze juice of lemons over tripe and add water to cover by about 2 inches. Cook in boiling water over moderate-high heat for 15 minutes.
3. Drain water and remove tripe. Rinse again under cold running water and place tripe on a cutting board. Cut tripe into 1 1/2 x 1/2-inch strips.
4. Return tripe and calf’s feet to kettle and add fresh water to cover. Bring to a boil, lower heat and simmer, covered, until tripe is tender (1 1/2 to 2 hours).
5. Add pumpkin, yautia, name, yams, Sazon Goya, tomato sauce and salt. Cover and continue simmering at a low boil until vegetables are tender (about 1/2 hour). If a thicker stew is preferred, simmer, uncovered, during the last 10 minutes of cooking.
Yield: 8 servings. 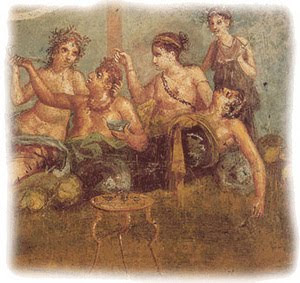 As noted in an earlier blog, I have always been fascinated by ancient Roman cooking. My second cookbook, The Pharaoh’s Feast (Thunder’s Mouth Press) has a whole chapter on this. Roman meals, especially at the time of the Empire, were sumptuous productions for the upper classes. They were ostentatious and sometimes downright weird. Imagine eating dormice, sow’s womb, and peacock’s brain in a sauce. Admittedly, not something for everyone
Yet, in a Roman banquet (and some of the dishes were quite sophisticated), each meal began with a sweet aperitif, mulsum, a mix of wine and honey. Then the successive courses were served and here, early in the dinner, the guests ate without drinking. Then they drank without eating. Wisely, the Romans, like the ancient Greeks before them, normally drank their wine mixed with water.
An ancient gourmand, Apicius, who lived in the time of Emperor Nero, wrote a tome, On Cookery, or De Re Coquinaria. In it he has a recipe for spiced honey wine that calls for peppercorns, mastic (a sort of resin), bay leaf, saffron, and dates. Trying to emulate this recipe would be a daunting undertaking. I prefer to make the mulsum by simply combining the honey and the wine. The recipe follows below; and note that it is best to use pure, unprocessed raw honey, the type sold in health food stores.
MULSUM
1/2 cup honey
1 bottle medium-dry red wine
1. Heat the honey in a small saucepan. Do not boil. Remove from the honey and let it cool.
2. Mix the wine and honey in a ceramic jar or pitcher and serve at cool room temperature. the wine and honey can also be mixed in a bowl and served in a decanter.
Yield: 4 to 6 servings. 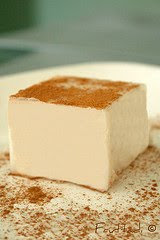 Those of us from a Caribbean heritage have a thing about coconuts. We drink the coconut milk, snack on coconut meat, mix it in our rum drinks, and use it in our cooking, mainly in our desserts. And the prime dessert dish of all is tembleque, or coconut custard. It’s rich, it’s creamy, it’s a delight. And a hell of a bother to cook. It’s the only recipe (apart from pasteles) in my tome, Puerto Rican Cuisine in America (Perseus Book Group), that takes time to prepare. But, believe it, my friends, it’s worth it.

First of all, to do the thing right, you need fresh, ripe coconuts. These can be acquired in any Caribbean, Asian or Indian market. You need to drain them, grate the coconut meat, cook it and strain it. Agreed. It’s time consuming. But it’s a hell of a lot better than the pre-packaged tembleque mix in stores, and much healthier. It doesn’t have all the preservatives or chemicals in it.

If you still don’t want to invest the time, you can shortcut by using canned coconut milk, which is readily available in most supermarkets. Omit the coconut part and use with the rest of the ingredients noted in the recipe given below. But, for the genuine taste of pure, luscious tembleque, nothing beats the original.

1. Pierce coconut (a big nail is best) and drain liquid into a small bowl. Reserve.
2. Split coconuts and remove white meat from shell. Separate the brown skin from coconut meat.
3. Break the coconut meat into pieces, rinse under cold water and grate finely.
4. Place grated coconut in a bowl. Add enough water to reserve coconut liquid so that it measures 3 1/2 cups. Bring liquid to a boil and add grated coconut.
5. Drain coconut in a colander or strainer, pressing with the hands to extract coconut milk into a bowl.
6. Heat one cup water. Add same coconut shreds as before and strain again into the same bowl that holds the coconut milk. Discard shreds.
7. In a large pot or saucepan, combine cornstarch, sugar, salt and vanilla. Stir in coconut milk, a little bit at a time and blend well.
8. Cook on moderate heat, stirring constantly with a wooden spoon until mixture thickens.
9. Reduce heat to low and stir until mixture boils.
10. Remove from heat and pour into 8 slightly wet, individual molds or a large round pan or mold.
11. Let cool and invert into molds, serving dish or platter. Sprinkle with nutmeg and cinnamon and serve.
Yield: 8 servings.